If I ever wanted to understand the experience of the average teenage fan girl(or boy), screaming in excitement at the start of a Justin Bieber concert, I came a little closer recently. Sir David Attenborough’s – ‘A Quest for Life’ live show hit the Perth Convention & Exhibition Centre like a pop concert and I, in turn, arrived post event nervously giggling away like a school girl in expectation of their first brush with their idol.
I will admit a modicum of bias. I have, since a child, gleefully explored the outdoors, loved nature and wildlife documentaries, and was deeply influenced by my father who, with no element of exaggeration was a zoological encyclopedia. In short I was raised on a steady diet of Attenborough. At 90 years of age and most likely on his last tour of Australia I count myself lucky to even have secured tickets and didn’t know quite what to expect from the well travelled nonagenarian. Would I be disappointed with the man compared to the legend? A live performance versus the expertly edited and scripted series for which Attenborough is renowned? In fact the show and Attenborough would exceed all my expectations and build on the already formidable legend.
The packed theatre murmured away before proceedings began with several audience members hastily rushing to their seats, mere moments before the show began, after being caught up in merchandise line. Pfft, merchandise hoarders, I scoffed. Sir David was introduced by Australian media anchor favourite Ray Martin, to a standing ovation, before both settled down in wingback chairs and the questions began. Martin would fire a few queries about Attenborough’s early life in academia and television before Attenborough picked up the bone and ran through a remarkable chain of events from the early days at the BBC on his first program, Zoo Quest to modern day documentary marvels Planet Earth and the Life Series. Attenborough also related individual and personal stories that stood out to him including the hard task of spending months away from his wife and family trying to get that perfect shot or the early days of sponsoring his projects by collecting animals for the London Zoo. Attenborough was quick witted, well spoken and often fired back cheeky responses to his host’s questions. The intermission came far to quickly but did allow me to sprint to the front of the merchandise line were I proceeded to buy everything they had. A DVD, Attenborough’s autobiography and an official program signed by the great man himself. Yes, It would seem I can hoard with the best of them. 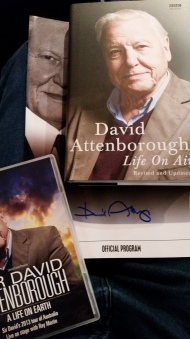 The show itself was interlaced with footage and pictures displayed on the big screen from various sources and archives and Attenborough held the crowd on every word. Not only did a ‘Quest for Life’ showcase a career dedicated to nature, but also nature itself and the challenges which now face the world, it’s environment and humanity. Sir David finished off the show by taking and answering questions from his devotees before thanking the crowd in an encore appearance on stage, arms raised in what is sure to be his curtin call in Australia. It was truly a great night and one that I will always remember as I believe will everyone who attended. Thankyou Sir David.