The Diver Giant towers over the city.

The Giants arrived, walked our streets and won our hearts in three days of wonder and magic that encapsulated the Perth and West  Australian public.

The Giants were invited to Western Australia as part of the Perth International Arts Festival but no one could have predicted exactly how popular they would become. The Little Girl giant and the Diver giant tell a story of the Anzacs and over a million people were expected to attend the free event over the weekend.

Despite some reports of the public experiencing transport issues from the overwhelming numbers wishing to attend, I arrived at Langley Park with my family in tow 30 minutes before the Girl Giant was to awaken on the Saturday morning. She was still sleeping when we took up position at the fence surrounding her gigantic bed with the crowd abuzz with expectation. People opened up to strangers and allowed the smaller children, including my own, to push past and take prime position on the grass frontage. The young, 6 metre high giant was breathing heavily but seemed peaceful despite the ever growing crowd noise.

When the awakening song of the indigenous dancers vibrated through the large speakers encircling the girl giant her eyes started to blink awake and with the help of the lilliputian puppeteer helpers she rose from her slumber. After removing her covers the giant showered, inquisitively gazed around the mesmerized onlookers and, with some more help, donned her blue day dress and started off into the streets of the city.

The girl was joined on her stroll by thousands of people clamouring to take up positions for both photos and to merely to take in the magic of her presence. Along her route she would don a raincoat, climb into a boat of the dreamtime, ride a scooter and take a toilet break as she searched for the Diver Giant.

To the joy of another large crowd the Diver Giant himself awakened in another part of the city before starting off on his own journey to search out the girl. If the Girl Giant’s size wowed onlookers the Diver’s 9 metre stance proved an epic sight as he(and his hard working helpers) stepped his 3 tonnes towards the centre of the city, stopping only occasionally for a large drink of water from a fire hose.

The two would periodically rest before embarking on their quest yet again and would eventually meet in a loving and remarkably moving embrace on the foreshore of the Swan River.

Their journey is due to end on the Sunday afternoon as both giants board a barge on the river itself which will see their time and their story in our city come to a close, a story ending but one which by no means will ever be forgotten. The Giants may be colossal wooden marionette puppets but they have a presence and a heart which has enchanted all in this city that have immersed themselves in their story. They will be missed. 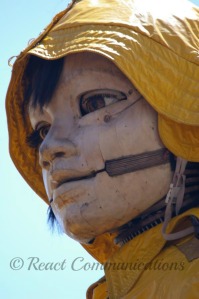