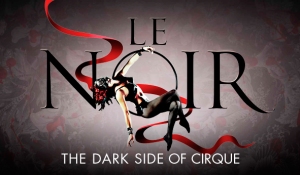 I arrived at the Crown Burswood complex on a windy and overcast afternoon on the final day of the Le Noir Cirque performances in Perth. The stormy weather added to the atmosphere that the event’s “The Dark Side of Cirque” catch-phrase had already generated amongst the attendees and we were not to be disappointed.

The bravery and daring of the circus like performances had patrons pinned to their seats with the only respite being the occasional burlesque like dance routine or the funny antics of the French accented MC who would pull unsuspecting audience members on stage for various levels of embarrassing interaction.

The crowd was kept mesmerized throughout with seemingly impossible acts of contortion, strength, balance, endurance and, dare I say it, death defying courage. The Wheel of Death had people gasping and shutting their eyes as the acrobats leaped and free fell their way through and around two large conjoined, fast spinning cages. This was no more impressive than the woman being spun around by her neck, joined to her partner with a strip of leather, while he skated his way around the stage or the strong man balancing on a tower of free rolling cylindrical pipes. The real nature, and danger, of the acts was quickly bought home however when the two trapeze artists both fell onto their respective safety mats at the start of their act which saw their performance cancelled(both were seemingly shaken but ok).

The show progressed seamlessly and mixed amazing athleticism with the seductive story of the performers journey from a white joyful celebration to a dark seductive, thrill seeking adventure.

The fitness levels and muscular, toned bodies only emphasise the work that the performers put in both on and off the stage.Le Noir is a great show and one I’d recommend despite it making me feel inadequate as a human being.